Home » Why React.JS is considered Ideal for App Development?

Why React.JS is considered Ideal for App Development?

JavaScript has made is huge in the last two decades. Moreover, the emergence of frameworks based out of JavaScript has increased its popularity by a thousand folds. There’s figuratively no word that exists, that hasn’t had a JavaScript framework named after it.

You have Angular, Aurelia, Backbone, Chaplin, Cappuccino, Echo, Ember, and the list goes on to Wakanda framework. Do you see what we want to say? JavaScript frameworks are just everywhere!

However, there’s one framework that has renowned itself as a top contender in the race to be the best of the best. Yes, we are talking about React.js.

React.js was a brainchild of a Facebook engineer, Jordan Walke. It was first deployed on Facebook’s newsfeed in 2011. 2012 saw React’s emergence on Instagram. Open-sourced for the first time in May 2013, React.js has come down a long way. It is one of the preferred JavaScript frameworks to develop applications, today.

How preferred, you’d ask? Well, websites such as Airbnb, Feedly, Netflix, and WhatsApp have been running on React.js.

React.js is basically a JavaScript library to build User Interfaces. It is maintained by Facebook and its large community of developer enthusiasts. It is used to create complex UI’s and break them down into simple components for easy configuration and tuning.

React.js uses the widely-used Model-View-Controller (MVC) software design pattern to develop and implement user interfaces. The Model is your database, View is the User Interface, and Controller is the medium that connects the Model and View and has a logic attached to it. React is referred to as a View in an MVC structure.

Flux is made up of four components:

Here’s one interesting thing about React.js. It creates an in-memory data structure cache. Any change made in the View is stored here. Once the change has been committed, only the related component is updated, not the entire page. Saving a lot of loading time, eh?

The differentiation could have its blog topic, so we shall halt it here.
In a nutshell, React.js and React Native are two distinct featured JS platforms with certain similarities. They belong to different leagues.

Still, wonder how React.js can be used to build amazing apps? Read ahead.

Development with React.JS is Easy

React.js caters only to the View in the MVC model. It makes React.js a lesser complicated framework to grasp. You just need to be versed with JavaScript’s basic functionality and a knack to learn. Also, the tutorials library is vast enough to solve every problem you’ll come across as a learner or developer.

Being an open-source library has its advantages. You have a huge community of renowned developers and tech enthusiasts constantly working on making the framework better.
Besides, there is no restriction while using the ready-made templates provided by these developers. This ensures the library is continuously updated with assets for web development and mobile applications.

For React.js Facebook allows the use of JSX, a syntax extension. It allows you to combine the functionalities of JavaScript and HTML.
As a developer, you can now focus on creating individual components and then combine them. This allows for easy development of high-volume applications.

Most of your frameworks have extensive third-party plugin support. These plugins extend your framework’s capabilities to simplify the app building process. React itself has many plugins available to extend its functionalities.
Besides React, organizations such as CentOS, Chef, JBoss, Magneto, and Joomla! Among others provide extensive plugin support for React.js.

Unlike other frameworks, React uses native components to render the app. This not only allows for a unique rendering process but also gives you the closest feel of the app when it gets deployed.
Additionally, when the app interacts with the user, the component that interacts with the user gets re-rendered and not the entire page. This process saves a ton of computational and rendering time, thus making the app faster and quicker to respond.

We’ve mentioned this before. We will reiterate it again (because it is crucial that you remember). React.js is highly UI-centric.
Any complex UI can be broken down into individual components. It extends your capability to build a highly-complex structured app while focusing one component at a time.

This functionality works in sync with the View. Each function can be differentiated via classes. Each class can have a set of functions and arguments.
This allows for the elements to have their own ecosystem. You can customize the View by displaying the requested by passing the arguments.

React follows the write once, deploy anywhere code. It also supports component reusability.
This not only opens doors for process optimization but also allows for quick and accurate app development.

Here’s a comprehensive list of frameworks that you can use with React.js to build world-class apps and websites.

Here’s an interesting fact. React Native was released just 3 years ago. It was released by Facebook in line with the React.js library.

React Native allows for mobile app development using the same JSX and JavaScript used by React.js. A major differentiator between React.js and React Native is that the latter doesn’t use HTML for rendering purposes. Instead, it renders the app on an alternate component that gives you a real look and feel of the app.

The basic process of how React Native works is simple. It uses JavaScript to build the visualizations while React builds the actual app in line with the UI.

Here are some basic advantages and disadvantages of using React Native: 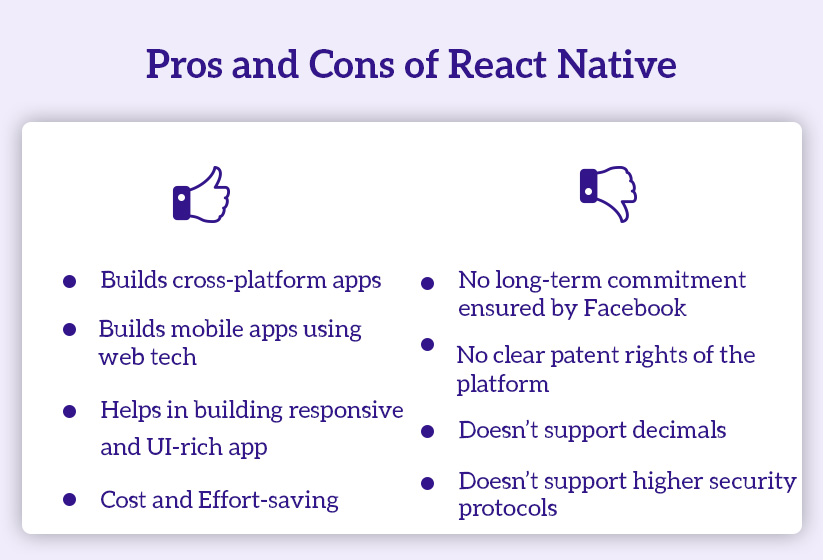 With over 400 UI elements, 600+ icons, 74 CSS animations among others, React Bootstrap is among the top contenders for UI implementation.

As the name suggests, React Bootstrap is React’s version of Bootstrap. Besides React, it is available for Angular and Vue. The best part of React Bootstrap is that it doesn’t require jQuery. However, this also marks one of its disadvantages.

Let’s take a look at its advantages and disadvantages: 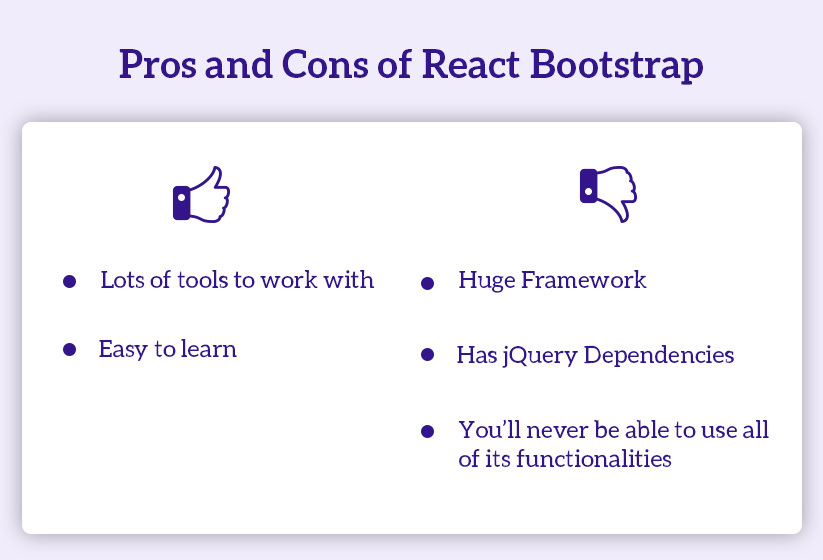 Simply put, React Toolbox is built on CSS written in SASS, Webpack, and ES6. If you want to import components bundled with CSS, the module bundler should convert these into SASS modules.
React Toolbox comes with 30+ out-of-box components. It is a set of React components that implements Google Material Design specification.

Material UI comprises a set of components implementing Google’s Material Design Guidelines.
It was the first-ever UI kit developed for React. It comprises of all the components required to design an app and is configured with a pre-defined color palette. It allows the developers to create a custom theme for the app.

Here are some pros and cons of Material UI: 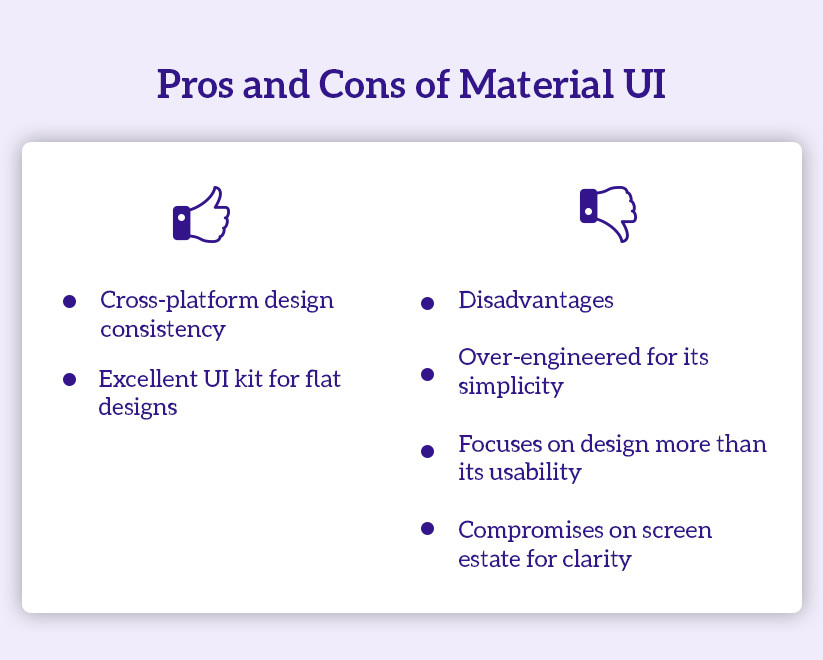 Do you wish to provide your users with a lightweight experience? Semantic UI is your choice, then. It comes pre-loaded with flat and subtle designs.
Semantic UI was introduced by jQuery and LESS with an intent to reuse flat and sleek components. It comprises five reusable components, they are: elements, collection, views, module, and behaviors.
Here are some advantages and disadvantages of Semantic UI: 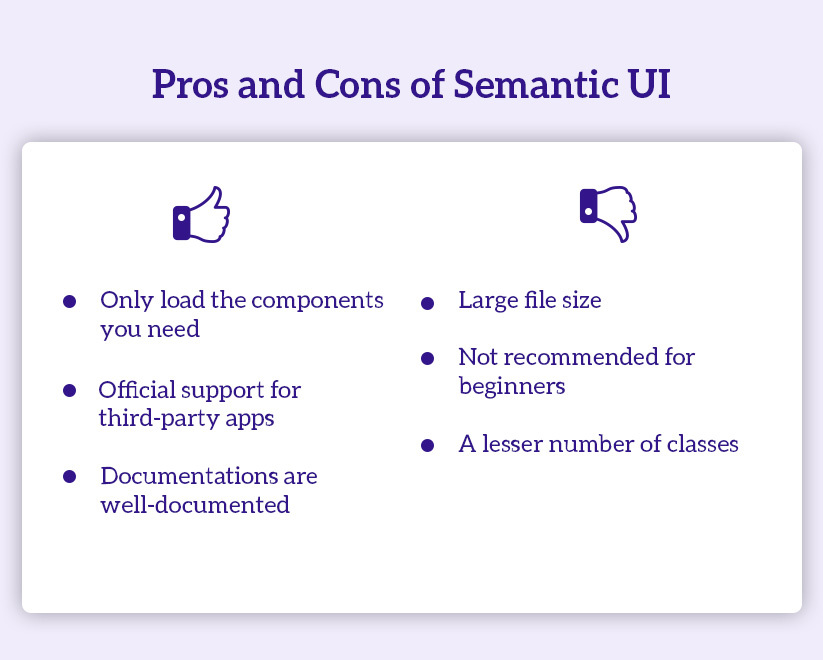 Ant.Design is a UI design framework built upon React.js library. It is owned by a Chinese organization called Ant Design.

To put down the basics, Ant is easy to use and implement and provide with tons of high-quality components. You can directly use them with your React projects.
Ant is written in TypeScript. It needs to be debugged via JSX and ES2015 and some other external services. This can be done via hot reloads.

Rookie or seasoned, React is the next big thing (which already is huge enough). React’s most prized possessions are its speed, UI friendly nature, and is helping hard to design responsive apps.

React grows as you read this blog. More and more reusable components are being uploaded for you as you think to research more about React.

Wish to know more about React and how it can make you the next big thing? Contact us!

Dhananjay (DJ) Goel is the CTO at Alphalogic, passionate about technology, startups, game of thrones and coffee. He enjoys working on challenging problems with innovative startups.

You have subscribed, thanks!

Mobile App Development Rated 5 / 5 based on 5 reviews. | Review Me
This site uses technical cookies and allows the sending of 'third-party' cookies. By continuing to browse, you accept the use of cookies.ACCEPT
cookies and policy

Any cookies that may not be particularly necessary for the website to function and is used specifically to collect user personal data via analytics, ads, other embedded contents are termed as non-necessary cookies. It is mandatory to procure user consent prior to running these cookies on your website.